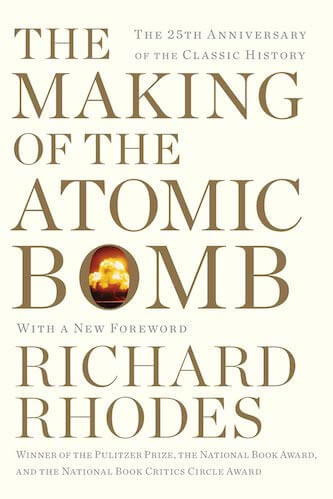 The Making of the Atomic Bomb

While the book's subject is one of the deadliest weapons of all times, it was an absolute pleasure to read, all 886 pages of it. No wonder the book got so many awards, including The Pulitzer and The National Book Award.

The story is more a compilation of tens or even hundreds of stories. There's no one single storyline; there are dozens, all working in parallel, intertwining, depending on each other.

It's a story of one of the most ambitious, impactful and grandiose projects in human history. It tells what needed to happen, what large group of geniuses had to be assembled, and the project's enormous scale and complexity. The project was far from a sure thing when it started. It's a wonder it succeeded at all. The book shows a glimpse of why and how.

It has it all:

The book is full of all those details, and I could easily imagine many people not making it through, but for me, each piece added to the big picture.

The author shows so much and so well: the science, the times, the war, the complexity, the scale, the logistics, the morality, the choices that needed to be made, the coping mechanisms after the fact, and of course, the people, so many fascinating people (Niels Bohr, J. Robert Oppenheimer, Albert Einstein, Ernest Rutherford, Marie Curie, Max Planck, Enrico Fermi, John von Neumann, etc.)

If your geekiness level is above 50%, there's a chance you'll love it. Otherwise, you're more likely to give up frustrated than to finish it.

Get updates when I publish a new article, review a new book or share a new #TIL.