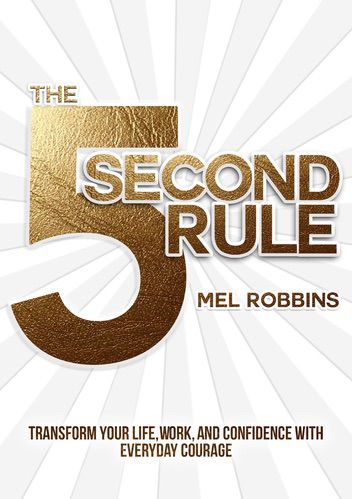 You know the books that should really be a blog post? This is not that kind of book.

This book should be a really good tweet, with some room to spare.

This is a kind of book where 95%+ of value can be condensed into literally one sentence. The title gives away half of it. Here it is: "If you have an instinct to act on a goal, you must physically move within 5 seconds or your brain will kill it."

That's it. There's nothing more to it. Not a single thing.

The full title of the book is The 5 Second Rule: Transform Your Life, Work, and Confidence with Everyday Courage but that seems like overkill.

Given all of the above, it may not be a bad thing. I knew full well that there won't be much of actual content beyond the core rule. And there was even less than I thought it would be. While it was infuriating, I was ok with it. Knowing beforehand, I wanted this one idea repeated over and over, so that it sticks.

The author was trying really hard to put more meat on it.

In short: the idea is good. It's worth remembering and acting on it often, making it a habit. The book is not good as a literary piece of work but a good one to hammer the same thing into you from all the angles, even from the ones that don't make much sense.

Get updates when I publish a new article, review a new book or share a new #TIL.