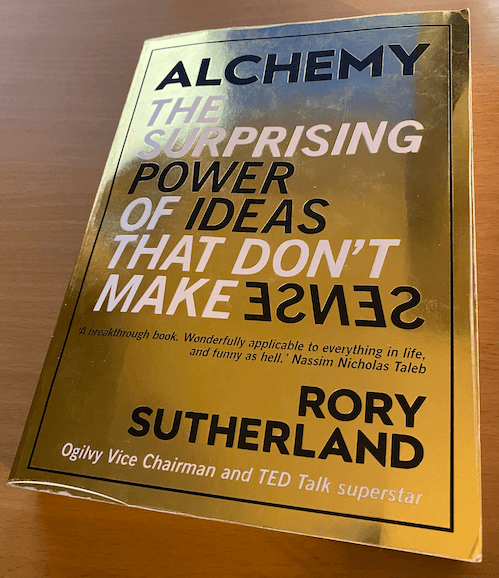 Alchemy: The Surprising Power of Ideas That Don't Make Sense

Alchemy by Rory Sutherland gets nearly universal praise. And I don’t get it. I find the book interesting but not as valuable as people think. Here’s why.

First, the author is shooting himself in the foot by making the very first claim on the back of the book a false one:

I’ve asked everybody and everybody told me that Red Bull tastes great. I love Red Bull’s taste as well. In my opinion, Red Bull is so popular in significant part because it tastes so good. Luckily, the other reasons for Red Bull’s popularity were correctly identified in the book: energy boost, PR campaign, “bad boy” image, the inadvertent effect of boosting popularity when it was prohibited to consume with alcohol, etc.

I realize many people may not like Red Bull’s taste. But when you claim that “everyone” hates the taste, yet I and everyone I asked love it, your credibility goes down a couple of notches.

The book is captivating, no doubt about it. Rory Sutherland is a good salesman, knows how to tell a good story and has many anecdotes from decades of his work in advertising at Ogilvy. But it’s interesting in a way that Malcolm Gladwell’s books are interesting: great stories, but the stories are anecdotal, yet made to sound like scientific truths.

Alchemy is more a collection of essays rather than one overarching theme. The essays are loosely grouped into a few themes: unreasonable customer behavior, signaling, satisficing, etc. Each essay focuses on one aspect, explains it, and gives some examples or tells a story. Most topics are well-known if you’re even a little bit interested in behavioral economics or psychology. Nothing wrong with those. But some are pure anecdotes. Something happened to the author once, some time ago, and he spins it into almost a universal law, without a shred of evidence or studies, or anything else beyond “because I told you so”.

I also didn’t like the author’s constant pointing out how people’s behavior is often stupid or doesn’t make sense when it clearly didn’t make sense only when viewed from an economic perspective and was perfectly valid and rational from a psychological or evolutionary perspective. Not everything is about the economy, and even when it is, not everything follows simplistic economic rules. The whole field of behavioral economics emerged as a result of this discovery, yet Rory Sutherland acts like he’s the first one to point this out and the first to explain it.

With all that said, the book is actually good. When you ignore the author’s feeling of self-importance and omni-knowledge, the rest is both valuable and entertaining.